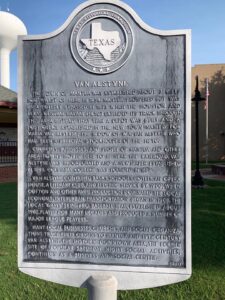 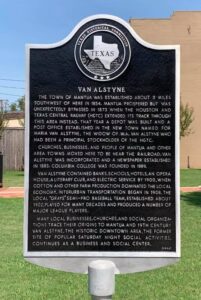 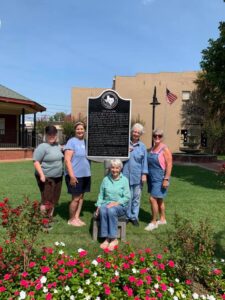 Text on the marker:

The town of Mantua was established about 3 miles southwest of here in 1854. Mantua prospered but was unexpectedly bypassed in 1873 when the Houston and Texas Central Railway (H&TC) extended its track through this area instead. That year a depot was built and a post office established in the new town named for Maria Van Alstyne, the widow of W.A. Van Alstyne who had been a principal stockholder of the H&TC.

Churches, businesses, and people of Mantua and other area towns moved here to be near the railroad. Van Alstyne was incorporated and a newspaper established in 1883. Columbia College was founded in 1889.

Van Alstyne contained banks, schools, hotels, an opera house, a literary club, and electric service. by 1900, when cotton and other farm production dominated the local economy. Interurban transportation began in 1908. The local "Grays" semi-pro baseball team, established about 1902, played for many decades and produced a number of major league players.

About Sister Grove chapter: On October 5, 2013, we officially became the Sister Grove Chapter, National Society Daughters of the American Revolution, in Van Alstyne, Texas, which is thirty miles south of the beautiful Red River, along Interstate 75. If you wish to discover your heritage associated with the American Revolution, we will be happy to help you. In order to be eligible for membership in DAR, you need to be able to prove lineal, bloodline descent from an ancestor who aided in achieving American independence. We are willing and able to assist you in your research, and guide you along the way. It is a wonderful journey well worth the time and effort. 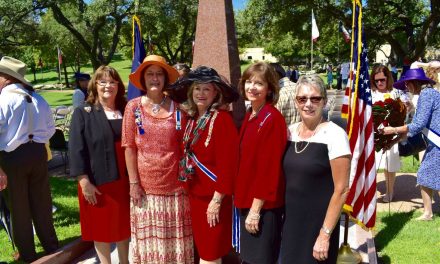